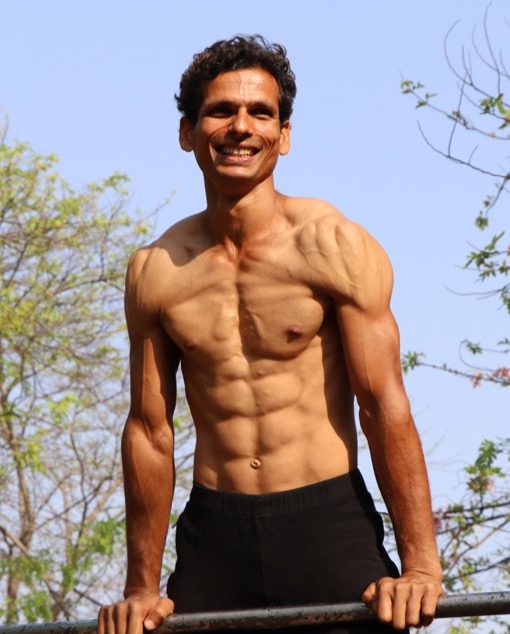 Gunjan Sharma, the founder of Flexible Fitness Company, aims to create an ecosystem that is not only balanced and holistic but also functional in the truest sense of the word. He is a pioneer in his field and since the past 20 years he has completely devoted himself to this cause. He, along with his team, has trained and transformed more than 1000+ lives globally by improving their physical and mental health equilibrium. Gunjan’s only passion is to serve people and to teach them simple tools that can help achieve a permanent state of excellent health and fitness.

Here is his story in his own words. Hopefully it can inspire you to take the first step towards your own physical and mental well-being.

Early Days – My Love for Fitness

My love for fitness started very early. In my village school, I participated in all sporting activities and being very agile, I was good at long jump, high jump, kabaddi and wrestling. I was especially good at cycle racing (I always won!) and I could comfortably ride 2 – 3 kms at a stretch without holding the handlebars!

One day, I met a boy from Bhagalpur city who had come to my village. He showed me a front flip and said he learnt it in his karate class. I couldn’t believe my eyes as I had only seen this in movies! From that day onwards, I was determined to learn martial arts and do all of this and more.

I went to Bhagalpur after completing my 10th standard, but sadly due to lack of funds to pay the fees, I could never enroll myself in a karate class. Unfortunately, I ended up watching many karate classes from the outside and could never really participate as I needed to focus on my studies.

After successfully completing my 12th standard, I went to Ludhiana to stay with my eldest brother as my family was unable to continue the financial support they were providing me. I shared my dream to learn karate with my brother, but much to my dismay he advised me against it as it didn’t seem like a suitable career option at that time. I then joined an English-speaking class to improve my English-speaking skills, however the dream of learning karate was still alive within me.

In 2000, I returned to Bhagalpur and joined the Marwari Vyayamshala and began training for Yoga, Gymnastics, Malkhamb and Karate. I even got a double promotion in the Karate belt test.

Though my family did not have the finances to support me, they never stopped me from pursuing my passions. To be self-sufficient and help pay for my food and stay, after many struggles, I found a job and I began teaching Mathematics to a student as a home tutor. My earnings were very meagre, however my dream to be independent and pursue my passions kept me going.

After 6 months of being in Bhagalpur, I decided to move to Chandigarh in search of a better job.

From 2001 to 2002, thanks to the financial help from my family (my father even sold his ancestral land), I completed a computer course in Chandigarh but I was still unable to get a job. I even tried giving home tuitions, but that also didn’t work.

I finally got a part-time job as a courier boy. The requirement for this job was to be a graduate and I had only completed my 12th standard; however, I managed to convince them and began earning Rs 800/- per month. Everyone loved my work as I was very quick, but after a month or so I again borrowed money from my sister to move to Delhi in search of better opportunities.

In March 2003, I decided to do data entry work from home (as I had heard a lot about it) and pursue karate in the evenings. To buy a computer and a chair for my work, I borrowed Rs 50,000/- from my siblings and my relatives. I also submitted Rs 8000/- as security deposit to the data entry office and received work from them that was to be submitted after a month.

I worked day and night to complete the work within the given time and after a month I went back to the office to submit it, but guess what? I was shocked to see that there was no office! I had invested nearly Rs 60,000/- and in return received nothing.

To make a living, I began teaching computers and that earned me approximately Rs 1800/- per month, but to pursue my dream of doing karate I needed more. I saved up money to buy my first mobile phone and then I created a poster to advertise for home tuitions on which I wrote my phone number. In this way, a student contacted me and I began teaching him. Slowly the number of students increased and after a year, I was earning Rs 10,000/- per month.

2008: Became a Martial Arts Coach and began training others.

2009: Formed a new company with a friend to provide outdoor training (Jeet Kune Do and Parkour) in Delhi and NCR.

Though I lived in Dwarka, I had to be in Faridabad (45 kms from Dwarka) at 5 am every day for the training. I was determined to grab every opportunity that came my way. Those were the days of riding 100-200 kms on my bike every morning and giving tuitions in the evenings to help cover my living expenses, buy fuel for my bike, and pay for my karate classes.

After earning a steady monthly income by giving tuitions, in 2009, I was inspired to start my first TTC so that I could reach out to more people. Initially, I was successful in training 5 students to become coaches and they began earning extremely well.

In 2011, I started classes in Mumbai. I not only trained 65 students over 3 years but I also trained my family members (brothers, sisters-in-law, nephews and nieces).

Positive media coverage in newspapers and TV was a boon and I was invited to do a Parkour workshop by IIT Bombay for TechFest 2011, which was telecast on the MTV channel.

In 2014, Chandan Sharma (my elder brother) and I conducted a TTC in Goa. My sister-in-law, niece, nephew and some ex-students of mine also joined us. The participants of this TTC came from all walks of life and the TTC proved to be a life changing experience for them. Within 6 months, each one of them became a successful coach earning a high income.

My next TTC is planned for 2021 and it will be taught online. Based on my experience and knowledge, I’m confident that within 6 months, every participant will become a successful coach. They will not only gain financial independence, but will also be able to tailor their training to meet the individual requirements of their students.

In 2012, my Bollywood journey began and I worked with Salman Khan, Shah Rukh Khan, Akshay Kumar, and the late Sushant Singh Rajput for TV commercials and movies.

In 2014, I successfully auditioned for India’s Got Talent.

I live in Juhu, Mumbai and teach various classes. You can learn more about these classes from our website.

To summarize, the advantage of enrolling with me is that my 20 years of fitness experience is condensed and shared with my students in a wholistic manner. This helps them gain independence and become successful in all spheres of life.

A big Thank You to my family who supported me and helped me achieve my dream!